Showing posts from July, 2016
Show All

A Month in the Yukon 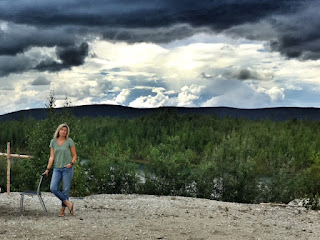 I’ve been in Canada for a month – specifically, the Yukon Territory – even more specifically, my family and I have been dividing our time between the town of Dawson City and a mining camp two hours on dirt roads away.


Every photo I’ve taken this month has featured the sky. It is unavoidable and magnificent, and is in a state of constant change. When we arrived at the end of June, there were about two hours of dimness between 2-4am. Now, at the end of July, it’s almost dark by midnight, and in a couple of weeks, the Northern Lights might even be visible.


We’ll be gone then. Gone back to the land of Pokemon Go, which, in this country where our cell phones don’t work, has been fabulously impossible. Gone back to the world of effortless internet, where streaming pol…
Read more
More posts